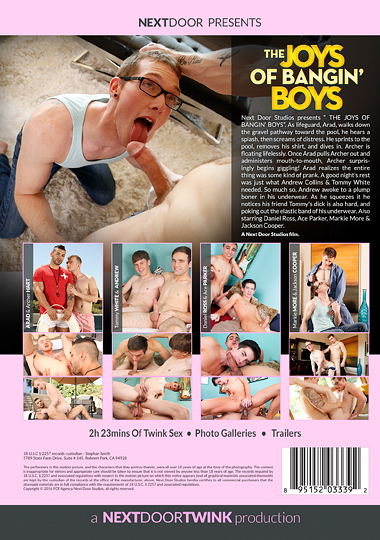 “ THE JOYS OF BANGIN’ BOYS”. As lifeguard, Arad, walks down the gravel pathway toward the pool, he hears a splash, then screams of distress. He sprints to the pool, removes his shirt, and dives in. Archer is floating lifelessly. Once Arad pulls Archer out and administers mouth-to-mouth, Archer surprisingly begins giggling! Arad realizes the entire thing was some kind of prank. A good night's rest was just what Andrew Collins & Tommy White needed. So much so, Andrew awoke to a plump boner in his underwear. As he squeezes it he notices his friend Tommy's dick is also hard, and poking out the elastic band of his underwear. Also starring Daniel Ross, Ace Parker, Markie More & Jackson Cooper.

+11
95
Write a complaint
To favorites