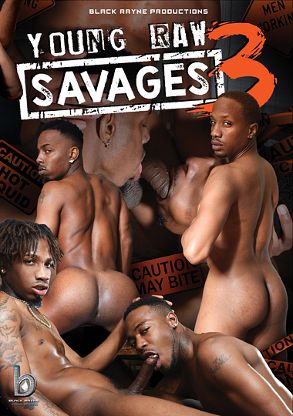 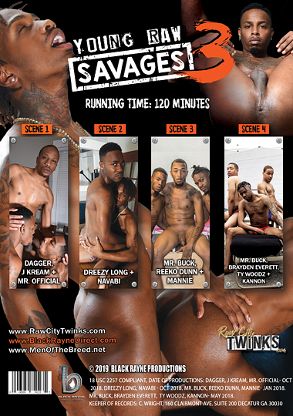 Nothing like a surprise threesome. Who doesn’t love a top who sucks dick? And if you can’t move after getting fucked, you've be fucked by a savage! Young Raw Savages 3 brings back fan favorites Dagger, Dreezy, Reeko and Daddy Buck! The new crew wasn’t quite prepared to be dickmatized! This gets really raw and really nasty! Buck takes over in this mind blowing threesome that sets the stage and raises the bar for all who dare to enter the City. Reeko figured he would slide in and help fuck Mannie with the phattie, but little did he know, Buck had other things in mind. Crushing him under the weight of his meat and making Reeko tap out. Mannie takes advantage and shoves his surprisingly phat dick into Reeko's open and throbbing hole, only to deliver a massive nut all over his back. A must see! Dagger is at it again in an unexpected 2 on 1. He thought he was coming over to chill. But who the fuck chills without playing in some southern boy booty. Mr. Official was getting his meat sucked on but when he saw how big and curved J Kreams meat was he had to submit and taste that king size dick, He gets his nut off from a warm mouth while Dagger can’t help but bust as J Kream stretches his ass. You thought it was over? Let’s change it up. Get ready for a big booty shakedown; a BBQ gone wrong! Shake that ass and get ready to be tagged. Kannon, Ty Woodz and Brayden Everett all bend over for some good Daddy Buck dicking. From the backyard to the camper to the inside of the crib, it goes down like never before.

00
154
Write a complaint
To favorites